You are here: Home / Help & Resources / Know the Facts

Over the past 20 years, suicide rates have been on the rise in every state in the US except Nevada, according to recent findings from  the Center for Disease Control and Prevention. Their research found that the suicide rate increased by more than 30% than half of states from 1999 to 2016. In some states, that increase was as high as 58%.

Firearms accounted for more than half (51%) of all suicide deaths.

In 2016, the suicide rate was estimated to be around 13.4 out of 100,000, making it the 10th leading cause of death in the US. Topics such as mental health and suicide are at the forefront of public conversation, which means we are in a better position than ever to make a change. Here are some other trends that we want to see change in 2019:

Every 28 seconds, someone attempts suicide.

“In order to decrease suicide, we have to make space for those recovering from suicide to share their experiences.”

The American Association for Suicidology (AAS) estimates that there were 1.1 million suicide attempts in 2016. That translates to an attempt every 28 seconds. These numbers are difficult to estimate, because of the stigma many survivors face when they are recovering. John Draper, executive director of the National Suicide Prevention Lifeline remarked in a piece for Cosmopolitan in June that,  “Few of [the survivors] are being asked—and fewer still are talking—about their struggles through suicidal experiences.” In order to decrease suicide, we have to make space for those recovering from suicide to share their experiences.

Suicide is the 2nd leading cause of death for people aged 15-24.

Recently suicide became the second leading cause of death for young people. The rate of suicide among young people under the age of 25 was calculated to be approximately 13.2 out of 100,000 in 2016. According the 2015 Youth Risk Behaviors Survey, 8.6% of high schoolers had attempted suicide in the last 12 months. Girls attempted at approximately two times the rate of boys. Statistics among sexuality minority teens were even more concerning. Gay, lesbian, and bisexual teens were five times more likely to attempt suicide than their heterosexual peers.

If you’re struggling with suicide, text a trained Crisis Counselor at 741741 or call 911. We need you around.

“Men are more likely to face stigma when discussing their mental health, and thus are less likely to seek out support when struggling. ”

40% of those identifying as transgender have attempted suicide in their lifetime.

It is well documented that LGBTQ+  students are at an increased risk for suicide. However, a 2015 survey by the National Center for Transgender Equality estimated the transgender suicide rate to be almost nine times higher than that of the overall population. Our texters identifying as trans are 50% more likely to mention suicide in their conversations with us. Those identifying as transgender often face a unique set of challenges, such as lack of family support, social rejection, and difficulty of access to trans-specific healthcare, that increase their risk of suicide.

If you need to talk with another trans identifying individual, call the Trans Lifeline at 877-565-8860.

These statistics can seem scary, even overwhelming. But we can all do our part to prevent suicide. Learn how to recognize the warning signs that someone may be at risk for suicide. Don’t be afraid to ask someone you’re worried about if they’re struggling with suicide. Asking doesn’t plant the idea in their head. Rather, it opens up the conversation and decreases the stigma around suicide. In order to decrease the rate of suicide in the US, we must open up the conversation about suicide (and mental health in general) in order to support those who are struggling and those who are in recovery.

Cost 950,000+ years The number of years of potential life that were lost to suicide before age 65.

The best way to prevent suicide is through early detection, diagnosis, and treatment of depression and other mood disorders. 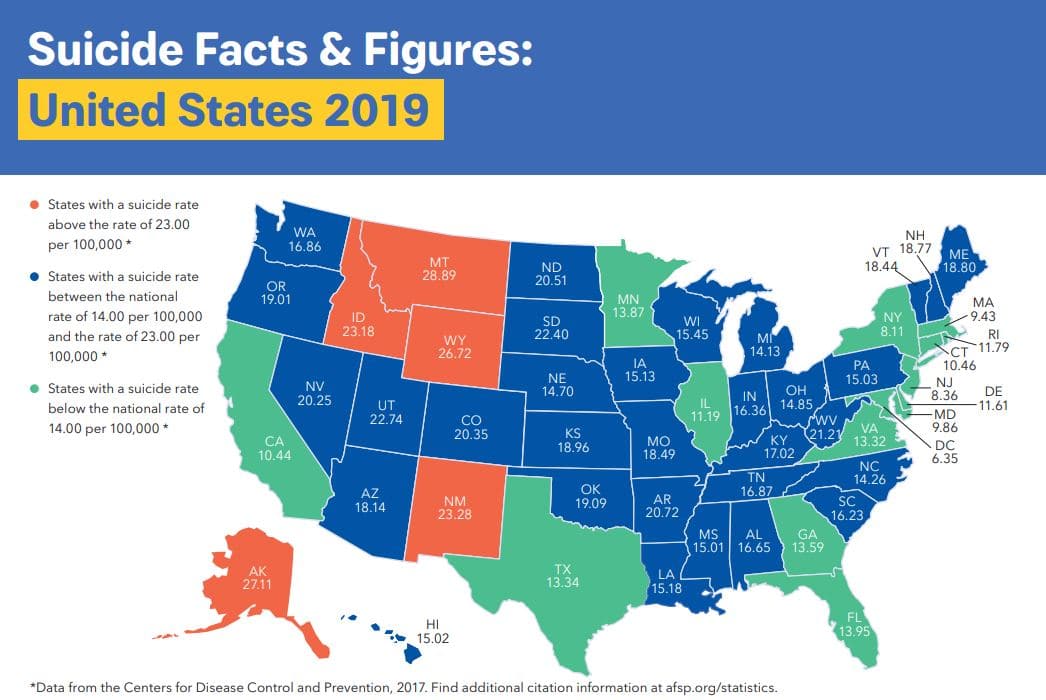 Source: Suicide Stattistics We’d Like to change in 2019. 9/14/2018 Hannah Kwawu-https://www.crisistextline.org/blog/change-the-stats

Figures from the Centers for Disease Control and Prevention Data & Statistics Fatal Injury Report for 2017.

Donate
Walk with us
Become a Sponsor